The role of a Footman derived from the attendants who ran beside or behind the carriages of aristocrats, many of whom were chosen for their physical attributes which were shown off by the traditional Footman’s dress of stockings worn below knee breeches. They ran alongside the coach to make sure it was not overturned by such obstacles as ditches or tree roots. They would also run ahead to prepare the destination place for their Principal’s arrival.

The word was subsequently extended to apply to a household servant, who usually filled glasses, placed and removed dishes, and who stood at meals while the Principal and guests remained seated. Footmen were something of a luxury and therefore a status symbol and part only of the grandest households. Footmen were expected to be unmarried in order to dedicate themselves to their employers. Once a commonly employed servant in great houses, Footmen became much rarer after World War I as fewer households could by then afford retinues of servants and retainers.

The position is now virtually an historic one although servants with this designation are still employed in the British Royal Household, where a Footman is considered the highest ranking servant of this class, wearing a distinctive scarlet livery on state occasions.

William Fortnum, Esq. was a Footman in the royal household of Queen Anne. The Royal Family’s insistence on having new candles every night meant a lot of half-used wax which William Fortnum promptly resold for a tidy profit. The enterprising William Fortnum also had a sideline business as a grocer. He convinced his landlord, Hugh Mason, to be his associate, and they founded the first Fortnum and Mason store in Mason’s small shop in St James’s Market in 1707.

Steven Scott Kaye, Esq. was a Footman in the royal household of Queen Elizabeth II. Having trained to the highest standards in personal service to Her Majesty performing a range of duties which included laying the table, serving beverages and meals, walking Corgis, valeting, chauffeuring, and attending to The Queen within all the Royal Residences, Steven decided to use his knowledge and experience gained in The Queen’s employment to create a unique English Tea Saloon and Wine Bar, joining forces with his business partner, Thomas, which brought you an establishment on Canning Circus, namely The Footman’s Rest.

Trading from Canning Circus for three years until the end of 2018, Steven and Thomas have now launched several new projects and offerings and are extremely excited in exploring the next chapters for The Footman’s Rest and to continue delivering their trademark quality service and excellence in all that they do. 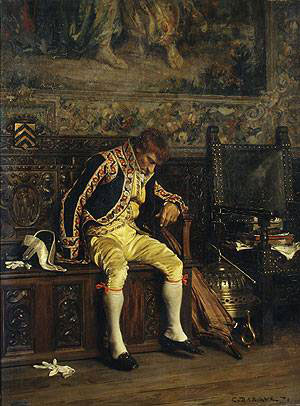